skip to main | skip to sidebar

A year ago the Volkskrant daily published pictures of an execution in the Dutch East Indies. The unknown images were photographed during the Dutch army’s “police actions“, but much could not be told then about the actual execution. However, an 87-year-old veteran has said now to daily NRC Handelsblad that he was then a witness to that execution. The Indonesians in the picture were executed by a Dutch lieutenant, he says. 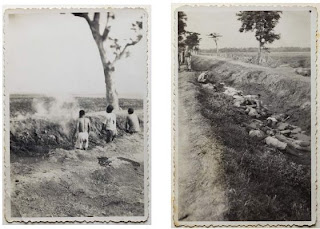 Last year, there was a lot to do about the pictures, because for the first time they showed that during the Dutch police actions there were summary executions. Experts of the NIOD [Dutch Institute for War Documentation] and the Dutch Institute for Military History (NIMH) concluded that these were unique pictures. However, where and why the execution had taken place was not known. The photos were taken by a soldier from Enschede who served as a conscript in the Dutch East Indies. This veteran is now deceased.

It now turns out that 87-year-old veteran Harry Nouwen was a witness to the execution, which he says took place in 1949 in the village Gedong Tataan in the province of South Sumatra. In NRC Handelsblad he reports that his lieutenant executed thirteen or fourteen men in retaliation for an ambush. The men had to sit with their hands in their necks in a ditch for this.

Harry Nouwen: “Biff bang bow. Within two minutes they were all dead”.

The veteran, who was a telegrapher, never spoke about the incident because he had sworn an oath to keep army secrets. That he is breaking the silence now, he says, is because of the photos published last year in the Volkskrant. That brought everything back. Nouwen says that it happened more often that his unit killed prisoners of war. …

The Veterans Institute has also spoken with Nouwen and say they have no reason to doubt the authenticity of his story.

Last year, the directors of three research institutes advocated a major new study of the military actions of the Netherlands in the former Dutch East Indies in the years 1945-1949.

Posted by batarahutagalung at 11:58 AM